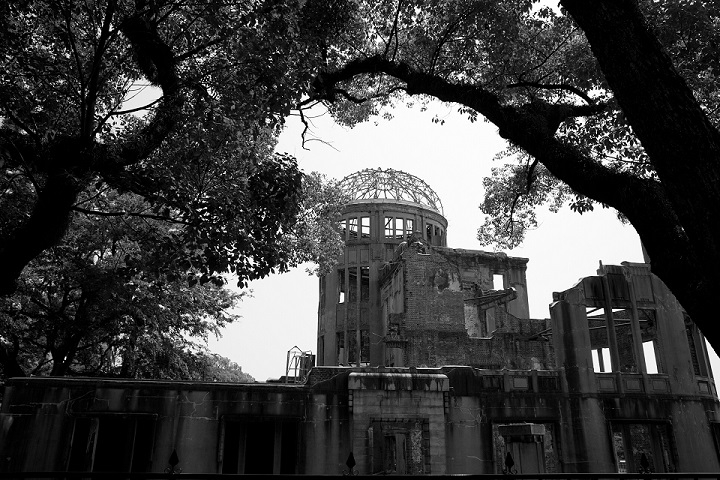 Something to Breathe looks to the future as a personal protest against weapons of mass destruction.

Originally created as a photography and sound installation to mark the 75th Anniversary of the atomic bombings on Hiroshima and Nagasaki of 1945 and scheduled to be shown at this year’s Freedom Festival, it will hopefully have its airing in summer 2021.

Something To Breathe is inspired by the 1980’s protest song Breathing by Kate Bush in which an unborn child pleads to be left something to breathe. It attempts to address and respond to the fact that women and girls are biologically more susceptible to harmful effects of ionising radiation and negative consequences including psychological health, displacement, social stigma and discrimination (Report, UN Institute for Disarmament Research 2016).

Women and girls are disproportionately affected by war. But when it comes to the use of nuclear weapons, nuclear weapons testing, and nuclear accidents, the odds are stacked against them further.

The project began five years ago in Hiroshima itself. On August 6, 2015 at 8.15am in the morning, I stood with young and old at Hiroshima’s ground zero, now a peace park, to mark the 70th Anniversary.

I had come to Hiroshima and Nagasaki to meet with survivors (hibakusha). As an independent documentary photographer, my lifelong work involves documenting in images, words and sounds, the often silent, hidden, invisible or ignored personal narratives of women survivors of war. And crucially, how they attempt to rebuild lives in the aftermath. 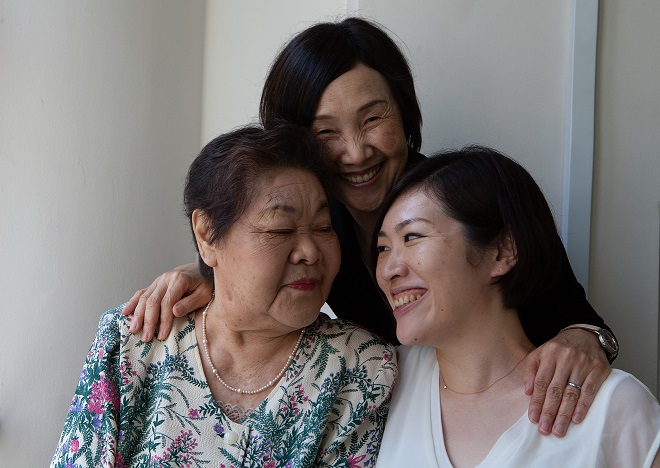 Inspired by her mother’s experience, Tomoko founded ANT-Hiroshima in 1987, a small organisation involved in relief, reconstruction and peace-building projects worldwide. Here, she talks about her work to promote the message of Hiroshima.

Teruko’s grand-daughter, Kuniko, is also a peace worker, studying the after-effects of the atomic bombings and among uranium mine workers and those involved in developing and testing nuclear weapons. Here, Kuniko shares more about her work. 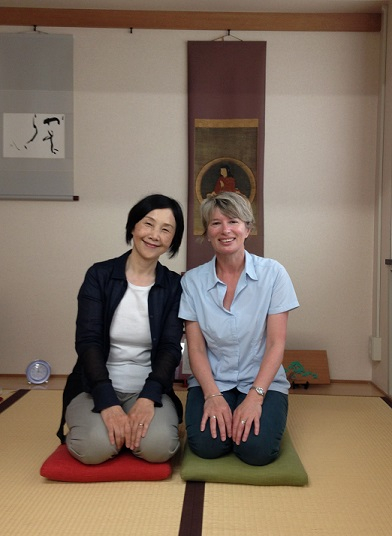 At ground zero, I collected fallen leaves from the hibaku jumoku (A-bomb survivor trees). The Abombed trees bore the full force of the atomic blast, stripped to charcoal stumps. Trees growing further away from the epicentre snapped or bent at their roots. Trunks facing the bomb’s heat rays were scorched, torn and their barks puckered.

In the weeks and months following the bombing, the traumatised people of Hiroshima looked around their landscape of ash, debris and waste and believed nothing would grow for seventy years. Yet the following spring the survivors noticed green shoots sprouting from the A-bomb trees. The story goes that these signs of new life gave the people of Hiroshima courage to rebuild their shattered city and to carry on.

Today the A-bomb trees stand as symbols of hope through their proven ability to generate new life, a power far greater than any weapon

I collected leaves from the A-bomb trees, and photographed them. Since then I have often used fallen petals and leaves from sites of conflicts to try to respond to what I hear in women’s testimonies, what I cannot say in documentary images.
Inspired by my visit to Japan, I looked more closely at the cherry blossom. As a symbol it has a fraught history, like the red remembrance poppy, used as in military propaganda as well as a sign of new life, hope and renewal. 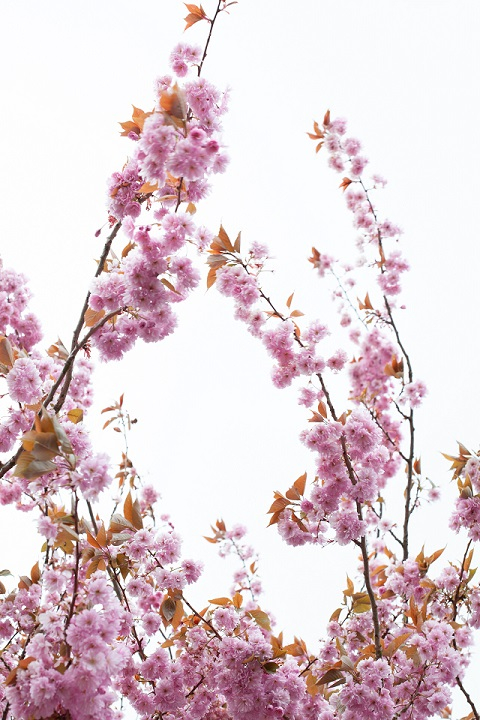 Back in Hull I began collecting cherry blossoms fallen from the cherry trees of Greatfield where I was born. Every spring the estate and cemetery froth in pink and crimson. I pressed the petals and later shaped them by hand and photographed them. 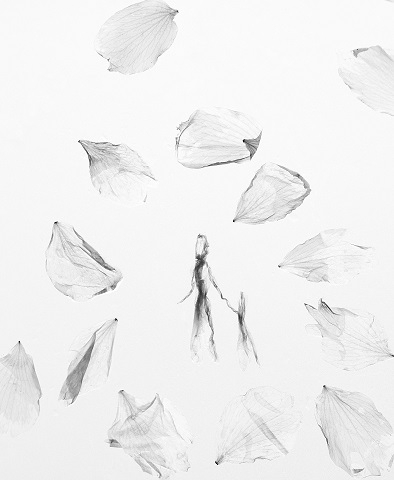 In April 2018 on the anniversary of the Chernobyl Nuclear Reactor 4 Explosion, I travelled to the 30km Exclusion Zone in Chernobyl in the Ukraine. I was welcomed into the village homes of Sofia, Olga and Eva, women who survived the disaster and have returned to live there. 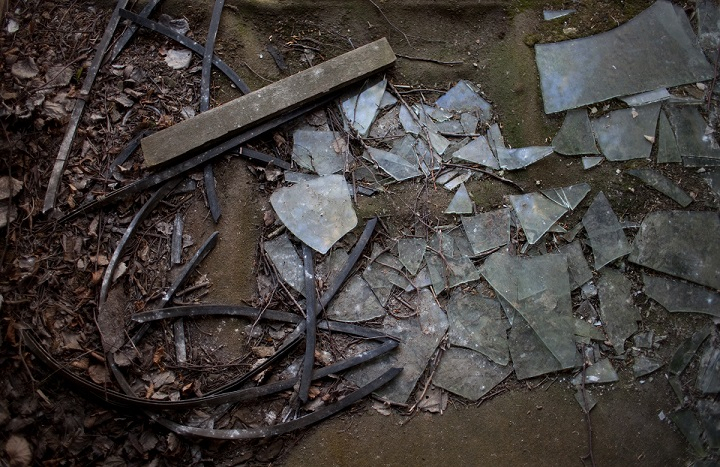 In Kiev I met with Valentina, a former Soviet solder who was ordered to help clean up at Chernobyl. She still suffers from the effects of radiation. 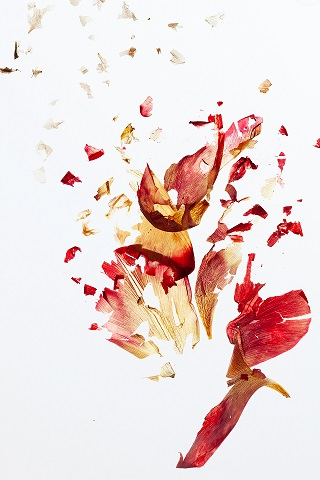 Experiencing Chernobyl, lush with spring blossoms, red tulips and singing birds, walking through the deserted town of Pripyat, seeing the reactor now sealed in its new sarcophagus and hearing the testimonies of the babushkas, is something I will never forget nor understand.

This spring I was due to return to Hiroshima and Nagasaki ahead of the 75th Anniversary, to continue our visual conversations with the hibakusha and to photograph the A-bomb cherry trees during the sakura cherry blossom season. I also planned to visit Fukushima, site of the tsunami and subsequent Fukushima Daiichi nuclear disaster in 2011, to interview female survivors who have returned to try to rebuild their communities,

Two days before I was due to fly to Tokyo, everything was cancelled and we were ordered into Lockdown.

My conversations with Tomoko and the hibakusha moved online. Through Naoko Koizumi, a truly inspiring and amazing interpreter and fixer, we did what we set out to do, despite a 5,270-miles distance and eight-hour time difference. High school students, Aiko Nishiyama and Shirabe Nakahara, gathered and pressed fallen cherry blossoms from the A-bomb cherry tree in Ikari Shrine, at ground zero in Hiroshima. Tomoko packaged them safely and sent them to Hull for me to photograph. I experimented with these tiny survivor petals. 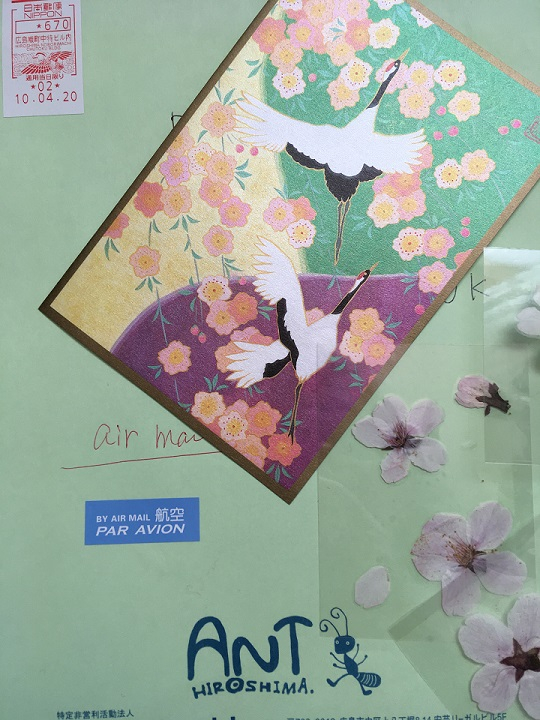 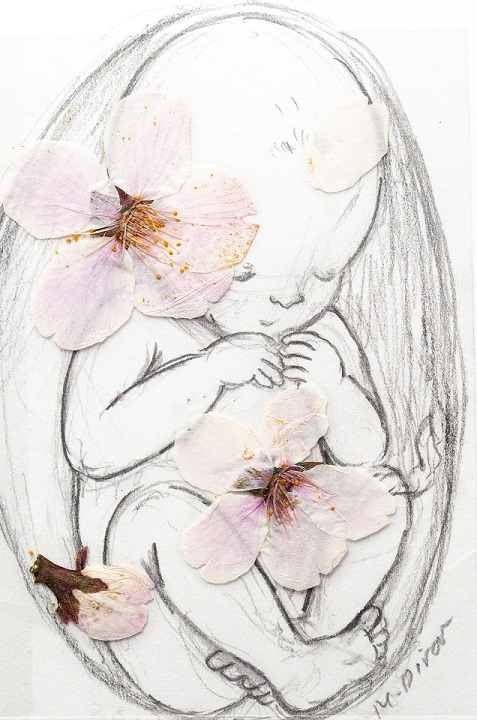 Blossoms from the A-Bomb cherry tree of Hiroshima. Collaboration between Sudanese/Hull artist and refugee of war, Mayas Dirar, and Lee Karen Stow

During Lockdown, emails flew between my home to Hiroshima and Hiroshima to home, and we experimented with Zoom. We devised ways to keep Something To Breathe alive and to amplify the voices of the hibakusha for the 75th Anniversary. I didn’t get back to Japan, but I’ve been present with the women almost everyday. In that time I have learned so much more about their lives, their histories, and their hopes for the future.

Despite the disruption and devastation of Covid-19, we kept our visual conversations going. Because no matter how bad things get, we believe we have to remind ourselves of another horrible reality: 75 years on from the world’s first atomic bombings on human beings, nine countries possess 13,410* nuclear weapons with almost 1,800** ready to launch within minutes. 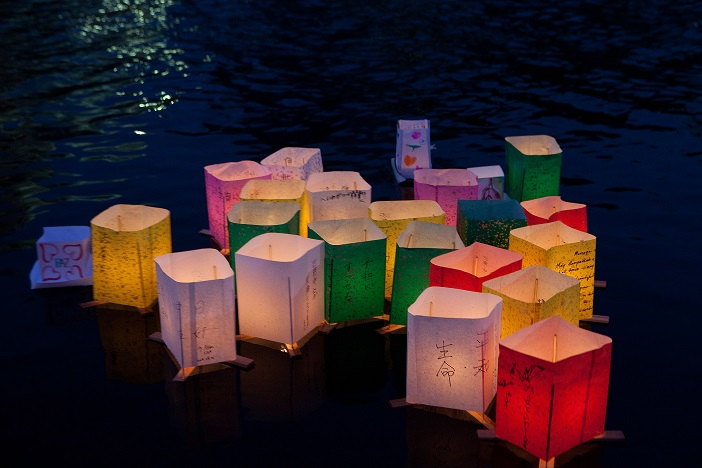 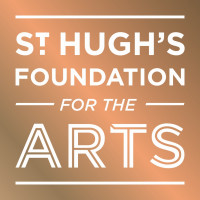 Click here to watch the discussion to mark the 75th anniversary and pre-recorded messages from all three generations.